Click here for lots of photos of the construction

Click here for delivery photos and internal fit out 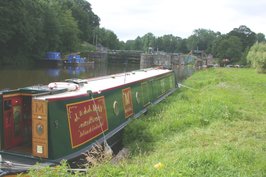 We travelled the waterways of the UK for two years. Here

There are basiclly three types of stern on a narrowboat. Traditional which has a small rear cabin covered by a sliding hatch, and a small rear deck like 'M' seen above and on the right here. A 'Semi-Trad' is the same shape as a 'Trad' but has an open-air rear deck below which is the engine. You'll see on the photo of Gift of Spirit above left that the cabin sides extend giving the appearance of a Traditional design. The third type is a Cruiser stern which has a completely open rear deck.

.....was built from scratch, starting with a single steel sheet on the floor. Dragon Narrowboats, near Mold in North Wales, built the shell for us both on time and within budget. She was a 57 ft 'Semi-Trad' boat.

Gift of Spirit was our first boat and was delivered to us with ballast, ply-wood floor, spray-foam insulation, ply wall boards and windows. We fitted all the interior out ourselves which was a huge learning curve. Except the engine that is, which should have been installed by a friend of mine - but that never happened! That story is told in 'A Narrowboat at Large'. It took 10 months to complete but we turned out a decent boat.

We only had one real cruise on her before I decided to buy another shell and start again using all the knowledge we'd acquired with Gift of Spirit. That was 'M'.

.....is so named after my beloved Godmother who died during the build. This boat is a 'Trad' and was bought as a shell, off the shelf in effect, from Lymm, Cheshire. This time including an engine - a Beta Marine.

This one arrived literally as a hollow steel tube with an engine so we had to organise ballast, floors, insulation and walls. The whole project took eight months to complete - working full time, seven days a week. Long days too!

Once again we did all the fitting out ourselves and to be honest, it was a definite improvement on Gift of Spirit. We had learned a lot but still made a minor cock-up when installing the toilet. Somehow I plumbed it into the hot water system in error - ending up with a hot flush!

That apart though she was fine and we had two fabulous years cruising many of the canals of England and Wales.