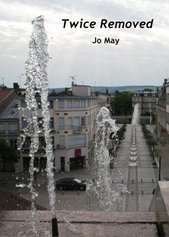 Thistledean a small town in the north of England.

It’s at the end of a single-track road so you’re unlikely to land there by accident. It’s a community that thrives in a time capsule, a gentle place of walnut veneer and old leather where three-for-a-pound shops and cardboard coffee are banned. A place that is an antidote to the manic clamour of today’s world. And the residents are protective of their way of life. They have been known to repel intruders using amusing but decisive methods.

Sandy Mason lived in the town for fifteen years until his death. He bequeathed his apartment to his nephew, Jake. It’s a rather humbling surprise to Jake, made all the more so when he unearths six hand-written diaries. He discovers that his uncle is a man of intrigue, a steadfast yet amusing man, a man of conscience. The journals record the latter years of Sandy’s life and give us a fascinating insight into the man as well as the town where he lived and it’s residents.

Thistledean is quirky. For example, it is run by an assembly comprising eight residents, locally referred to as The Junta, which keeps the town on the straight and narrow. There are plenty of places where you can get ‘cosmopolitan’ - but not Thistledean. The Junta is the guardian of the time warp within which the town is suspended. It’s a unique place but it thrives, and the residents like it. So do visitors.

The natives are a creative lot, they have even managed to inveigle the town on to a heritage tour roster. London, Chester, York and yes, Thistledean!

Through his uncle’s memoirs Jake is taken under the skin of the town and he finds a bevy of quirky characters (particularly in the local pub, The Black Bull) and a few surprises.

Jake settles down to read Sandy’s memoirs. Early in the tale he encounters Julia, a lady who needs help to unravel her past, and a wonderful friendship begins. They travel through her memories hoping to find answers to questions unanswered for most of her life. Their encounter is the catalyst for Sandy to begin to observe people. He spies them from the bay window of his second-floor apartment, targets them and goes for a chat, sometimes getting more than he bargained for. He refers to himself as an observer. The landlady at the pub calls him a snoop. Whichever, he means no harm and the result for us is a glimpse of an offbeat world.