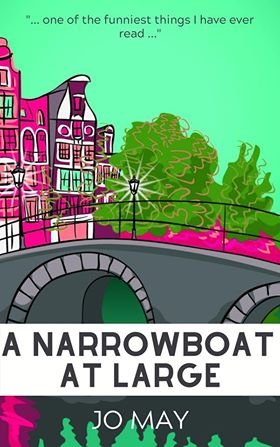 A Narrowboat at Large

So why did we take to the water? My wife can't swim, the dog hates it and I prefer beer.

Financially we were afloat and we lived in a perfectly decent house until my wife came up with the zany idea of living on a boat. I'd just got home from work, via the pub, when Jan asked me to watch a video while she prepared our frugal meal.

I watched a pair of old fogies trundling along a canal in the rain on a narrowboat. You can imagine my reply when she asked if I fancied emulating the sodden wrinklies and taking to the water. She's a lady of vision and determination (she married me after all) but this was elevating madness to a whole new level. Jan's oncologist had her a few years previously that she probably wouldn't see the new millennium, so she had a different perspective about the future than many people. Despite lots of huffing and head-shaking, twelve months later we had sold a perfectly respectable house, given up a job that kept us in cornflakes and moved onto a metal hole less than a tenth the size of our house – excluding garden.

We knew nothing about narrowboats – their workings, waterways lore and how we would cope being cooped up together – particularly when it's minus five and the nearest shop is miles away. We had a mountain to climb – which you can only do by using locks, and we'd never done a lock. A more accurate analogy is shooting the rapids because our venture took on a life of it's own and we were washed down stream on a tide of enthusiasm and ignorance.

Here's a  snippet from the book  when Jo and Jan were just beginning their search for a boat........

.....We bought magazines and trawled the internet but quickly leaned that this was nothing like looking for something with which we possess any degree of familiarity.

Like looking for a car for example. If you have a budget of 'X' and you like the sound of a Ford Fiesta you can immediately rule out the ‘Prestige’ or ‘Sports’ sections of Autocar - your search is instantly refined (indeed a car magazine has such sections). You know that if you spend £300 on a ten-year-old Fiesta, you might get something that looks alright but the chances are you’ll have to call out the breakdown service after a couple of hundred yards. The car would have been shiny when new and there is every chance that it would have been mechanically sound, but a 10-year-old car is asking for trouble. Not so with boats - some of them seem to mature with age – and generally speaking they are not designed to be disposable.

Also, unless you’ve had an 'enthusiast' tinkering with it, you are fairly sure of what you will find in your old Fiesta, i.e. lots of plastic, bits of sandwich, fag ends and a shiny steering wheel. With boats, although they are roughly the same shape, every one is different under the skin.

While travelling we met some great   people, here is one encounter on the Leeds Liverpool Canal.....

........... it was at Adlington where we first met Brian and Jenny. It was a pleasure to accompany them on and off all the way to Leeds. The male half of the partnership was one of those people for whom who the word mishap was invented. The first time we became aware of this was when he nipped down to the local shop for some beer. He returned with a bag full of Boddingtons bitter and a huge graze on his shin - obtained when his leg disappeared between the wooden pontoon and the bank. The graze complimented a nasty bruise higher up his leg that had appeared sometime previously, though of unknown origin. It’s what a friend of mine terms a U.D.I. (unidentified drinking injury). Every time you saw him he was limping on a different limb.

We had to make it work or the people who had laughed and scoffed would be proved right – we really were mad.

Well, make it work we did, and we're still boating twelve years on. It's marvellous and it possibly saved Jan's life.

The book is available through Amazon.

'A Narrowboat at Large'

'A book for anyone who wants to avoid boating.' Anon

'Is there no beginning to your talents?' Another anon