Here are some personal thoughts on my transformation

There are many ways of raising money, one of which was done with incredible enthusiasm at Hare Hill House, Littleborough on Saturday – cake eating! Cakes of all shape and size had been donated. I don't think I've ever seen so many beautiful creations annihilated in so short a time.

Another way of raising money is have your hair and beard shaved off. Not quite as attractive a proposition I grant you. But I don't eat cakes.

Family and friends have generously sponsored me. I think they did it in the hope that I'd end up looking a complete *insert adjective of choice*. In which respect they weren't disappointed.

The initial idea had been proposed by a clean-shaven man with almost no hair at all. In other words he had nothing much to lose. I had more hair sprouting out of my ears than he did up top. So would my decision to Brave the Shave mean more because I have an almost-covered pate? No, would it heck. In fact his choice is braver than mine – his might not come back at all this time!

I've had a beard for about twenty five years and hair for nearly sixty. I lost the beard for one brief period when I decided to chop it off while on holiday. (Was alcohol involved I hear you ask? Mind your own business.) It was an inoffensive, well-trimmed thing and I was quite attached to it. What made the shave more inexplicable is that I only had a cheap throw-away razor with me at the time. The whole performance was messy and uncomfortable. All the scabs looked like I'd developed lower-facial mange and boy, did it sting when I washed my face. It seemed like such a good idea at the time. Such a good idea that I re-grew my beard immediately (or as quickly as my manliness would allow – which was quite a while!). It's been ever-present since, lurking and part of me.

This time it'll be the full monty – hair and beard. Right at this moment I look like a portly badger with grey hair with the odd patch of dark. When I've finished I'll look like a fat peanut.

I've always been a bit touchy about having things removed. Eyebrows for example which my wife takes great delight in butchering. She pulls and tugs till my eyebrow is distended AT LEAST a foot from my forehead before letting it snap back into place with a fearsome thud. Funny for her, less so for me. I'm frightened to nod off in case she creeps up and has a yank. Fortunately on this occasion my follicle assassin is to be a professional. Jane Hall of The Crooked House Hair and Beauty Salon.

There are a few victims lined up and we sit in turn as Jane fires up the clippers. Unforgiving things they are creating a blizzard of grey whiskers amid a storm of insulting comments from the onlookers. Two of us are having the full hair / beard combo. It takes about fifteen minutes I suppose but feels much longer. My hairless nemesis, Peter, has come with a wig so Jane has something to operate on. She soon whips that off but takes mere seconds to tidy up the straggly bits left above his ears.

My extended family have come to watch, it's nice to have support, equally unsettling to be gawped at. The two youngest (aged 4 & 2) seem alarmed as my double chin is revealed to them for the first time.

Very few people are unaffected by this bastard of a disease at some stage in their lives. Members of my family have suffered, close friends too. As my loved ones struggled, they had help at a desperate time, as did I. To have someone there to say the right things and hold our hands is so important.

Since I was persuaded to defoliate I've thought about it quite a bit.

Stupidly, one of my first worries was vanity. This from a nearly-sixty year old blob for goodness sake!

Would I look more ridiculous than usual? No, probably not. Right, lets get on with it then.

There was no backing out when people started paying good money.

I was walking the dog on the morning of the shave when I had an epiphany.

(For those who are wondering, that's a sudden realization, not a senior accident!).

I realized that what I was doing was making me think about things, about my family for example. Making me consider somebody else for a change. Instead of thinking about that new phone, car or TV, I was thinking about something really worthwhile. We need the help of these fabulous folks at our very worst time, when we're at our most vulnerable, our most frightened. They've been there for me before and likely they'll be there for me again.

It takes an enormous amount of cash and skill to do what they do. Today I will be a tiny part of facilitating that.

Most startlingly I realized that now, right this second, someone somewhere is being helped by Macmillan.

It costs about £114 for a Macmillan Support Worker to help a family for one day, twice that for a CNS, Clinical Nurse Specialist.

I wonder who they'll be.

Thank you to everyone who stumped up. Brilliant, it's really appreciated. 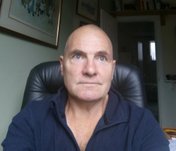